According to MarketsandMarkets, the "Meat Starter Cultures Market by Application (Sausages, Salami, Dry-cured meat, and Others), Microorganism (Bacteria, and Fungi), Composition (Multi-strain mix, Single strain, and Multi-strain), Form, and Region - Global Forecast to 2025" size is estimated to be valued at USD 62 million in 2020 and projected to reach USD 76 million by 2025, recording a CAGR of 3.9%, in terms of value. The functional properties of meat starter cultures and their benefits while incorporation in a wide range of applications are driving the global meat starter cultures market. 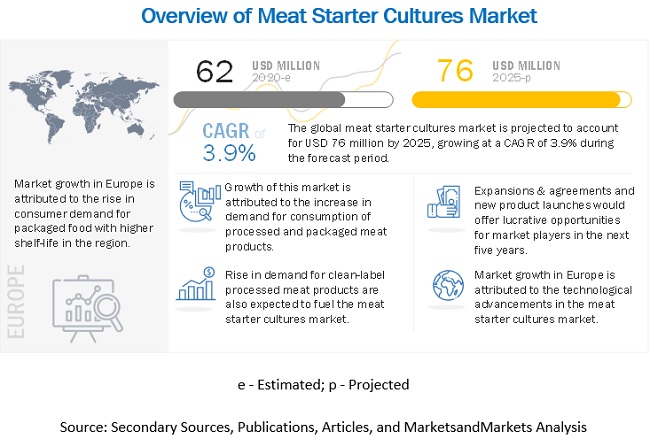 Based on the application, the sausages segment dominated the meat starter culture market. The dominance of this application can be attributed to the rising demand for sausages as a breakfast meat, as consumers in various countries such as the US, Canada, the UK, and Germany, are inclined toward the consumption of sausages. Meat starter culture provides additional safety and delays spoilage by shifting the uncontrolled fermentation. The segment is projected to grow at a CAGR of 3.8% during the forecast period.

The European region dominated the meat starter culture market with the largest share in 2019.